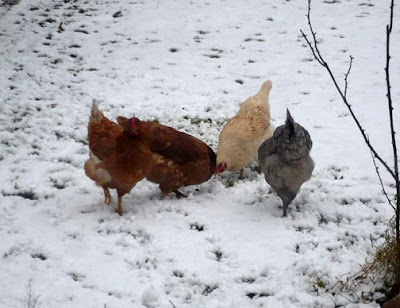 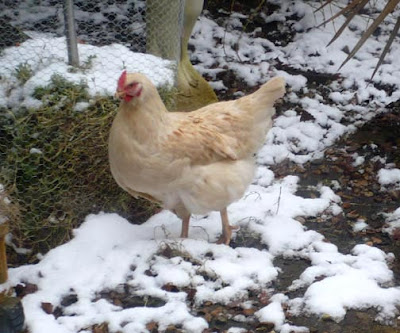 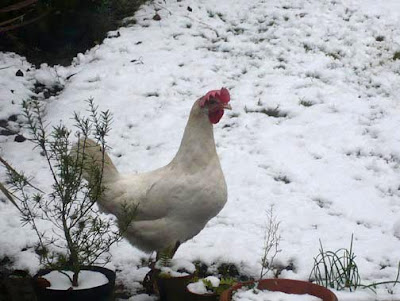 The chickens braced themselves and went out in the snow for the first time today. Instead of heading for the lawn at full speed as they usually do, they stopped short of the lawn and stayed on the patio at the far end of the garden. They then decided they'd follow me up the PATH and stay well away from the white stuff.
Lettuce (2nd picture) braved the snow tentatively and for some reason known only to her, did a bit of moonwalking. I guess she thought she could walk away from it. Dotty (one of the brown hens) thought 'well if its ok for her, its ok for me' and very slowly lifted one foot and placed it in the snow. Then, because Lettuce's moonwalking had un-earthed some green grass, they all stood around pecking the small patch they could see. Sybil thought the white stuff completely perplexing and looked around for something else to do.
In the end they thought they would concentrate on the biggest expanse of green they could see and set about devouring the privet hedge.
Today, the highlight of the chickens day has been snow. Tomorrow? Maybe more snow.......and a bit more hedge.
Hugs, Sarah x

Chickens are so funny aren't they and they have such definite personalities. My brothers four new young chooks were making a terrible row the other day, and he went out to the chicken house to see what was the problem. They were all gathered around an egg, squawking and carrying on like, "where did this come from, it shouldn't be here", and in fact, one of them had laid it, the first egg ever from one of them. I do hope they learn soon not to get so uptight every time one lays an egg. I love chickens, and yours look such cuties Sarah.

Loooove your chickens, Sarah! You've inspired me some art...!!;)
It is always a pleasure when I receive your visits and kind words... Thank you!
Monica x.

Oh they are so cute!

Sukie, the scaredy cat, went out in about 9 inches of snow but the other two don't want to know at all!

oh you bunny Bubba is adorable

How cute! You must have so much fun with them, it must be great to get the nice fresh eggs too.

Hi Sarah, oooh I love your chickies!! Can't wait to see the finished bunny too! Hope you are well - have a lovely weekend x

SUCH fun to see your chickens in the snow - never heard of a moon walking Chicken :) Hugs, Catherine x