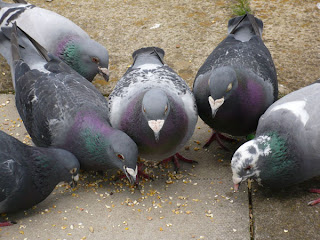 An update on the pigeon saga. Well, they are all gone, all nine (!) of them. But it's all good news! We thought they all belonged to the man in London, so didn't want to tell him they were here, for fear that he would collect them and 'neck' them. We found a note through the letterbox a long while after, with a name and telephone number (?). Unsure as to who it was we didn't ring it. To cut a long story short, seven of the pigeons belonged to a lovely man five minutes away from us, who had bought them from our houses previous owner. He rang the man in London, who said either 'neck' them or if he wanted them he could transfer them over to him. Well, the man local to us, is a big softy like us and wouldn't dream of necking them, so he's having them! All worked out well in the end. Hoorah!

Glad you sorted out the poor pigeons. Neck them! How cruel some people are :O(

Babs, it was such a relief the man that took them on didn't kill them on behalf of the new owner! Phew!

Rachael, no sadly 'necking' them, isn't smooching! It's as far removed from smooching as you could get :(