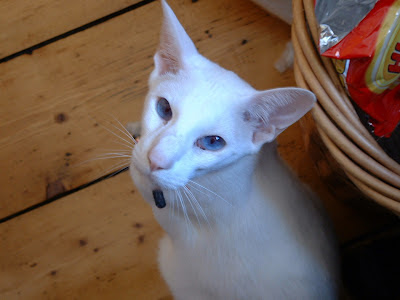 As I've no beary news, other than to say I'm making another rabbit (I seem to be in rabbit mode lately!) I thought I would pop some pics of my children (the furry four legged variety) on to my blog.

Above is Alfie, out white siamese, who I think is actually a two year old child, masquerading as a cat. Highly intelligent, he knows the word 'no' and 'bedtime' (stomps off to the utility, complaining as he goes) and 'dinner'. Dinner usually makes him go at a much faster pace and he'll stand waiting for the others to arrive before he starts to eat. His manners are impeccable.

Below is Harvey. Loves cuddles and is a bit of a drooler when extremely happy. A very soppy, limpet like boy! 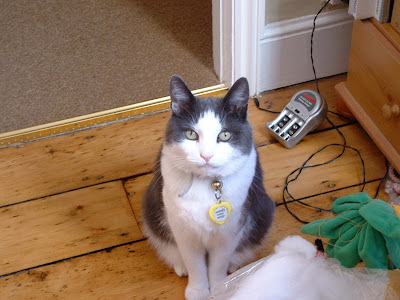 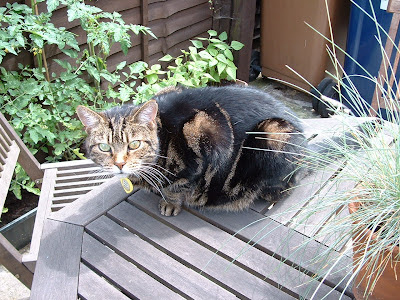 Then there is Ellie (Above). A rather heavy, chunky, cuddly tabby. Very chatty, though rather monosyllabic. Likes a lap (as do they all) and makes a rather handy hot water bottle, when the evenings get nippy. 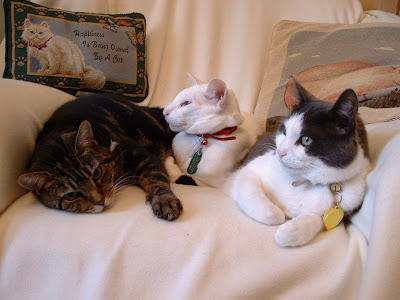 A rare shot of them all snuggled up together. The chairs now gone and the basket Ellie refuses to go in, either alone or with Harvey and Alfie. If Alfie tries to snuggles up to her, theres a lot of cat cursing from her, till she finds enough is enough and saunters off elsewhere. 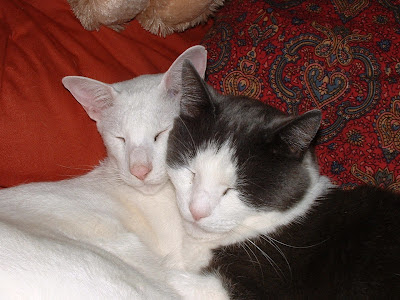 This last pic is just for the 'Awwww' factor. Harvey is mostly happy to let Alfie snuggle up. Especially if Alf goes about it in slow motion with the odd freeze frame. Occasionally he'll complain, then go about giving Alfie's head a good wash (I think he was a hairdresser in a previous life).
Right, now off to cut out the pattern for the rabbit. So hopefully bear/rabbit news soonish.
Bye for now x
Posted by Sarah at Tuesday, September 25, 2007

Oh I adore your cats! We have a Burmese who is getting on a bit now. We always like to have a minimum of three cats at a time so have lots of fun moment with them. You might like to pop to my blog and see my babies :O)

What scrumptious cats! I absolutely love them, but am so afraid of them getting hurt in the road that I won't have any. I have a doggie instead, (a border collie/German shepherd cross rescue dog)because she only goes out near the roads when she is on a lead. We have great fun with her off road, and she is very loving and obedient. Sindie, my daughter has the cats, so I can go to her house and give them a little lurve!
Sandie

Oh Sarah, isn't Ellie like my Arthur? All your cats are gorgeous. I wouldn't be without mine. They don't ask for much do they, just some love and some food.You can usually find mine on a bed with their legs in the air. :0)

Love the bears and rabbits by the way!

By the way, I just had to say how much I adore the little rabbit!! He so needs to be cuddled:0)

Hi Sarah
What terrific cats you have. They all look so different and yet so gorgeous. I too have three (used to be four) moggies. Willum, who Sindie will confirm, is the most laid back cat in the world, Boomer (his sister), the clumsiest, and Emma, who is seventeen, very wobbly and a little absent minded these days. I love Emma so much that it hurts to think that I won't have her much longer. I will put some photos on my blog too. Thank you for introducing us to your 'owners' !!!

Thanks all! I feel very proud ;)
Granny Grimble, wheres your blog entries, I was just looking at space.
Three could turn into seven if we have to have Mums cats if she can't look after them when she comes out of hospital. I think we will just have to buy a very small house (wendy house maybe?) on a huuuuuuge plot.
Hugs, Sarah x

Can you tell me how you know my daughter Sindie? The girl in the photo is Livvie, her youngest, who is 13 years old.
Sandie

I only know Sindie from her blog, theres a big photo of her on it and I saw how much Livvie looks like her!
I knew of her when she was a bearmaker too!
Hugs, Sarah x

I love your rabbit soooo much!!!

weechuff, rabbit (Cottontail?) is on my website. Have you seen him in all his glory!? Pleased you like him soooo much!
Hugs, Sarah x

what gorgeous photos Sarah, I LOVE cats too and have two tabby cats (I'll have to get some photos of them on my blog soon too). I had a chocolate point siamese for 21 years and they are so intelligent and the most wonderful friends you could ask for. Good luck with your rabbit making, I'm off to start on a panda.

Hi Catherine!
Alfie's dad was a choc point siamese. You can't breed a white to a white apparently, so his mum was a white siamese and his dad choc point. Then you get white and choc points in the litter.
I haven't made a panda in aaaaages ;) All the best with him!

Your cats are lovely!! I have three cats of my own but still haven't posted pictures of them yet. Hmmmmm. Curious.

Thank you so very much for peeking in on my blog!! I'd be honored to share a blog link with you!! Thank you for asking. :o)